or continue with social networks

or continue with social networks

FUT 21 TOTS: Bundesliga Squad and Stats Have Been Leaked

Recently, EA has announced the FUT 21 Team of the Season Bundesliga squad.

Germany's highest division is one of the most used leagues in FUT. It is not difficult to guess the reason for its popularity from the leagues with many stars. There are many outstanding performers in the 2020/21 campaign, and EA will praise them with special blue cards with upgrade stats.

Robert Lewandowski and Erling Haaland are the two most impressive players of the season. The outstanding performances of the two scoring a total of 64 goals, so in the Trade Market, both of them are very valuable.

In terms of assists, Bayern Munich playmaker Thomas Muller topped the list with 17 and hit 94-rated card to match.

Before the team was released, Union Berlin's left-back Christopher Lenz had tallied the most average of 2.8 tackles in 25 outings. But Alphonso Davis entered the team earlier than him because the young American rookie keeps amazing the football community with his eye-catching performances.

Below you can find all the Premier League TOTS lineups for the 2020/21 season. 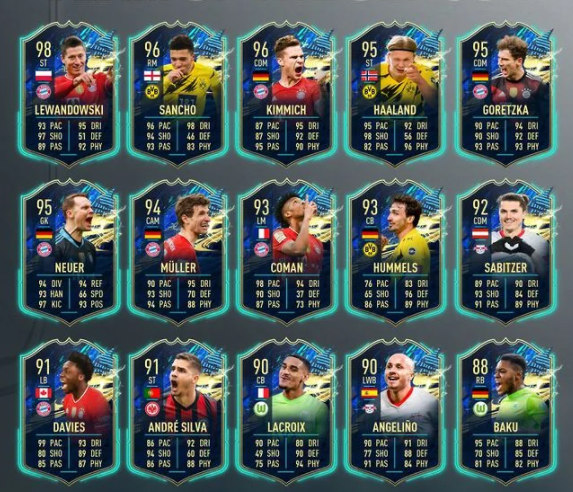 If you want to get these special edition cards, you can find them on the Trade Market, but their prices should be surprisingly high. Or if you are lucky enough, you can get them in standard or premium packs.