The most exciting Christmas game, stars were out in full force in Game 2 of the NBA's Christmas Day slate as LeBron James and Luka Doncic put on a show in the Dallas Mavericks' 124-115 win over the Los Angeles Lakers. Despite his best efforts, James could not help the visiting Lakers hold onto their early lead, as the Mavericks blitzed them offensively during the third quarter. Dallas put up a historic 51 points, a Christmas Day record, which proved to be too much for Los Angeles to overcome. 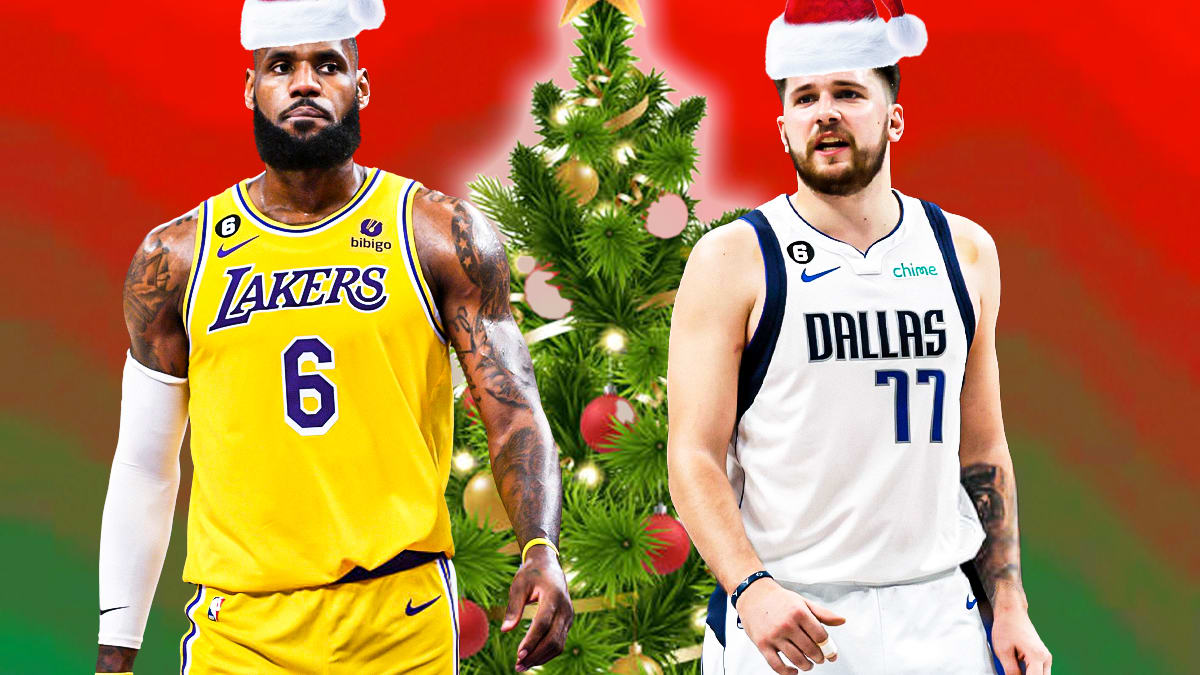 While Doncic will receive the bulk of the headlines following his near triple-double performance of 32 points, nine rebounds and nine assists, the Mavericks All-Star had plenty of help on the offensive end as Christian Wood and Tim Hardaway Jr. combined for 56 points in the win. On the other end of the spectrum, LeBron put up the type of superstar numbers we've grown accustomed to seeing over the years finishing with 38 points, six rebounds and five assists but the rest of the Lakers' roster did not offer him enough support to get the job done on the road. With the win, Dallas improves to 18-16 on the season while Los Angeles falls to 13-20.

Mavericks Explode in the Third Quarter
Things couldn't get worse than what the Mavericks did in the first half against the Lakers. They shot 39.5 percent from the field and 22.7 percent from 3-point range, and fell behind by 11 points to a Lakers team that was without Anthony Davis. Based on how poorly things went in the first two quarters, Dallas was bound to turn things around, but no one could've predicted the 51-point outburst the Mavericks laid on the Lakers, using a 20-5 run to go up 82-65 with two minutes left in the third quarter.

By the end of the third frame, Dallas was up to a 94-75 lead, and the 51 points they totaled was not only a Christmas Day record, and tied a Mavericks record for most points in a single quarter, but it was also the highest point total in a single quarter this season. It all happened thanks to nine 3s, four of which came from Tim Hardaway Jr. who scored 16 of his 26 points in the third quarter. Doncic also joined in on the third-quarter fun, scoring 13 of his 32 points during those 12 minutes, and dishing out six assists in the process.

It wasn't as if the Mavericks were doing anything dramatically different stylistically in the third quarter, it was just as simple as guys knocking down shots. That's been the story for Dallas all season long. When this team gets cooking from 3-point territory, they're difficult to beat. The Mavericks generate the second-most wide-open 3s this season, but in terms of making them, they're in the middle of the pack at 38.1 percent, which ranks 15th in the league. The first half was the version of the Mavericks that don't hit their wide-open looks, while the third quarter was a drastic swing in the other direction with nearly every shot going in. It's not sustainable going forward, but it's a positive sign that Dallas can and turn things around in the middle of a game and see players like Reggie Bullock, who have struggled heavily, get out of a slump.

LeBron James vs. Everyone
We already knew James was going to have to do it all for the Lakers to have a chance in this game, because without Davis on the floor there isn't much depth behind their two stars. But still, LeBron outscored the four other Lakers starters who combined for just 32 points. Russell Westbrook tried his best to offer some help off the bench, going for 17 points, five rebounds and four assists, and Austin Reaves had a quiet 16 points, but when you have no other starters score in double figures you're not going to win many games. Especially when the team shoots 32.1 percent from 3-point range, a long standing issue for the Lakers this season. L.A. ranks 26th in the league in 3-point percentage, and they shot just a hair below their season average, proving that once again this team desperately needs shooters to compete in the West. Even LeBron went 0 of 4 from deep, but when he's doing everything else on offense, that's just a small blip on the radar.

There was some hope in the first half, when the Lakers were shooting 53.5 percent from the field and sending double teams to Doncic every trip down the floor, which forced every other Mavericks player to put up points, which they struggled to do. The Lakers worked up a 14-point lead on two separate occasions in the first half, but once Dallas started catching fire from deep out of halftime, L.A. just didn't have the weapons to keep pace.

It's the latest example for Lakers fans to use to show GM Rob Pelinka that this team needs to make one or several moves, if they want any chance to make the playoffs, or even the play-in tournament.

Christian Wood Showing Why He Is in the Starting Lineup
For the sixth-straight game, Wood was in the starting lineup for the Mavericks, and it was perhaps his best game in a Mavericks uniform. He finished with 30 points, eight rebounds, seven assists, four steals and two blocks. It was a complete performance on offense, and he even had several key defensive possessions, showing that he's more than willing to put in the effort on that end of the floor. Wood had 15 points at halftime, which was a prime reason the Lakers lead wasn't bigger than it already was, and he continued his strong play out of the break as well.

It was the perfect timing for Wood to have such a dazzling performance, given he's now eligible for a four-year, $77 million contract extension. Wood's in the final year of his contract, and is set to become an unrestricted free agent this summer, but if the Mavericks want to keep the big man past this season, signing him to a contract now may be the better option, because if he continues to improve the price will only climb. And given how things went with Jalen Brunson, where Dallas could've offered him a contract extension midseason but passed on the opportunity, only to lose him to the Knicks as an unrestricted free agent last summer, they may not want that to happen again if their plan is to keep Wood past this season.